Parkway Green and Willow Park Housing Trust were delighted to win at the prestigious 2012 Be Proud Awards.

'Real Neighbours Wythenshawe' is a joint project across the two housing trusts in Wythenshawe and it won the community project of the year category.

The project has around 250 local people registered to volunteer in the community and offers training opportunities and boosts confidence and self-esteem. It also links in with other groups and agencies as well as improving community relationships and continues to go from strength to strength.

The 'Be Proud' awards recognise the work of people who go above and beyond in their normal everyday lives to help make a difference to Manchester and create a sense of pride and belonging in the city.

Well Being Coordinator at Parkway Green Housing Trust Nicola Hamilton, who helps coordinate the Real Neighbours said, "We are all over the moon to win this award as it shows the work we are doing is having a positive impact in the local community and we will continue to build on this success in the future. Congratulations to everyone involved!"

Chief Executive of Parkway Green Nigel Wilson said, "It’s a fantastic achievement in itself to even reach the finals of these awards and I would like to congratulate everyone involved, seeing Wythenshawe so well represented is a great tribute to the area and the community".

Joe Doherty, Chief Executive of Willow Park added.  "It's great that 'Real Neighbours' has been recognised as it not only demonstrates that a project can nurture and develop volunteers into strong members of the local community, but also feeds into the Wythenshawe Real Lives Campaign and highlights some of the great work going on here!"

Wythenshawe was also further represented at the Awards: Parkway Green was shortlisted in two other categories - Business in the Community and Community Project of the Year for the Wythenshawe Games and Willow Park was a finalist through Ryan Blackamore in the Young Achiever of the Year category.

Sarah Woolley, Regeneration Manager at Willow Park, said; "Ryan has been a fantastic ambassador for young people.  He was a key member of Willow Park's Youth Reborn Panel and was nominated and selected as the North West representative for the national UK Youth panel. Being a finalist at the Be Proud Awards is a great tribute to all his hard work." 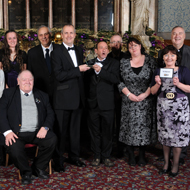 Download our app to be entered into a monthly prize draw of £100 high street vouchers, click on the link to enter your details