Supported by the National Apprenticeship Service, this Challenge will test non-technical work skills and the personal attributes of competing apprentices.

The 'Wythenshawe Apprentices' Team is one of 90 teams and 800 apprentices who have entered the challenge in the hope of being crowned Apprentice Team of the Year.

Teams have entered from businesses, training providers and colleges across England and also from a variety of different sectors which not only include Housing Trusts but also high street store chains, household names, engineering firms and local authorities.

The Wythenshawe Apprentices Team has just begun two months of competition activity which will raise the profile of apprenticeships in the local community and will consist of school visits, media interviews, social media work and community projects with the finalists being announced in early April.

The top two teams from each of the four regions (Central, London and South East, Northern and Southern) will then complete further fundraising and awareness-raising activity, culminating in an adventure challenge at Brathay Trust's Windermere headquarters in June.

Eddy Newman, Designate Chair of Wythenshawe Community Housing Group which forms on 1st April 2013, said, "Both Trusts  are committed to Apprenticeships as part of a range of employment initiatives which we support in Wythenshawe and entering this team is our endorsement of the value we place on them.  We have some great Apprentices and they will gain so much from a challenge like this.  It is something they will never forget."

Dillon Blammon, Apprentice Gas Technician from Willow Park said: "We're all really up for the challenge.  It's going to be hard work but we're bound to learn lots of new skills, improve our confidence and have a good time along the way.  Fingers crossed we make it to the residential and fly the flag for Wythenshawe. Please follow us on Twitter @WythApprentices  #BAC13 as we get points for any retweets".

Ashley Goddard, Apprentice Electrician from Parkway Green added, "We'll also be taking part in radio interviews, thanks to the support of WFM 97.2,  making films and doing presentations and have some special surprises lined up for our community projects which will take place during National Apprenticeship Week 11-15 March 2013.  Oh and we mustn't forget - thanks to Wythenshawe World for the mention" 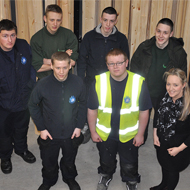