The Building & Electrical Company have recently supplied gym equipment to the club, which is based at the Royal Oak Community Centre in Baguley.

Since 2014, they have continued to support the club in many different ways from supplying T Shirts to sponsoring fights, even installing a branded sign at the centre to help demonstrate the partnership.

Manager of the Royal Oak Centre Gina Hall said, “The boxing club couldn’t exist without the help that we receive from all our partners. So on behalf of everyone here at club, thank you to AB Building & Electrical for all their support over the last few years.”

Director of AB Building & Electrical Dave Batterton said, “As a local contractor working in Wythenshawe it’s important for us to engage in positive schemes in the local community. It’s been great to be involved in the Royal Oak Boxing club since it launched in 2014 and it has been fantastic to see the club growing every year and becoming a really important part of the local community”.

Director of Assets, Paul Butterworth said, “It’s great to see a local contractor support the Wythenshawe community in this way, as this contributes to WCHG’s vision to create a community where people choose to live and work”.

The boxing club offers training sessions for both juniors and seniors, four evenings a week and has been going from strength to strength since it launched in January 2012. All coaches hold current CRB and First Aid Certificates.

For more information contact Gina on ginahall@btinternet.com or ring 0161 998 2146 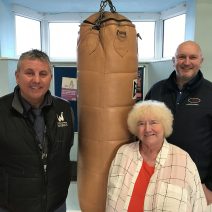