A local electrical company has shown their support for the Royal Oak Community Centre Boxing Club.

AB Electrical who work with Wythenshawe Community Housing Group have helped the amateur boxing club by supplying branded T Shirts for their boxers for when they train and enter competitions.

The club offers training sessions for both juniors and seniors, four evenings a week and has been going from strength to strength since it began in January 2012.

All coaches hold current CRB and First Aid Certificates and the club is already proving very popular with local people of all ages, who want to keep fit and learn a new skill.

Manager of the Royal Oak Centre Gina Hall said, "We would like to thanks AB Electrical for their help and I would like to take this opportunity to thank all the volunteers involved in the centre who have made the Boxing Club possible! It's very popular with local people of all ages who want to keep fit and learn a new skill."

Director of AB Electrical David Batterton said, "Engaging in positive schemes in the local communities is very important to us and after we heard about the Royal Oak Boxing Club, we had no hesitation in getting involved. We wish the club all the best as they continue to go from strength to strength in 2014."

Mechanical & Electrical Manger at Wythenshawe Community Housing Group John Burrell said, " I would like to take this opportunity to Thank AB Electrical for supporting the Boxing Club at the community centre. We are always looking at ways we can support the local area and we are delighted that they helped" 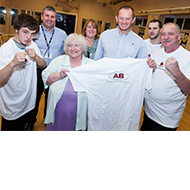