Wythenshawe Youth Forum was in celebration at the launch of their impressive fly on wall documentary, featuring the issues around unemployment and homelessness.

The documentary was developed as part of the Forum Strategy for 2016/17 to look at un-employment, Welfare Reform and how this is affecting homelessness in Wythenshawe. Its purpose was to highlight the issues and barriers people face in this situation and the hope to dispel stereo typing.

The Youth Forum provides youth’s age 13 -19 an important voice about decisions that affect them on a day to day basis across Wythenshawe. It provides opportunities for young people to express their ideas, opinions, and needs in consultation groups, with staff and other young people in the community.

8 core members meet regularly with several young people, for support with their work throughout the year. The group has been involved in numerous projects that influencing both practice and policy with ‘Young Manchester’ being a prime example as a youth support project.

The importance of having a youth forum for Wythenshawe Community Housing Group is to bring the young people of Wythenshawe together and get them involved in something that will benefit their future.

The youth forum was established in 2014 which was kick started with the ‘Wythenshawe Gone Good’ campaign, since then they have gone from strength to strength developing the youth forum. The Youth forum have captured over 1000 hours supporting community events and projects.

The purpose in this forum is to give young people a chance to develop their range of skills, such as confidence, event organizing and public speaking. This gives young people the chance to take their skills to future employment and open up their career paths.

In addition to the unemployment and homelessness the young people also covered domestic abuse, benefits and the value of leadership and importance of the young people’s voice. Over the past 12 months the young people involved have overcome many personal difficulties, but whilst doing this project they have shown resilience, and continued to work showing their dedicated approach to the forum.

Nigel Wilson, Group Chief Executive of Wythenshawe Community Housing Group said, “This was truly an inspiring evening; it was great to see how Wythenshawe Youth Forum has developed and embraced having their voice heard within the local community. We could not be prouder of them and the work they have put in over the last five months to produce such a professional documentary. The confidence that has grown amongst the young people during the project has been incredible and they have become really passionate about the issues discussed as well as challenging negative stereotypes associated with these issues”.

Tyra, from Wythenshawe Youth Forum said “The different stories in the documentaries were interesting but they all linked together. It was a shock to see how something created by young people can make a positive impact on the older generation”.

Lucy, from Wythenshawe Youth Forum said “The documentary was extremely factual and eye opening. It gave you an insight into the issues people face every day. The event was a good experience and it was great to see what other people thought and what their feedback was”.

Sir Richard Leese, Leader of Manchester City Council said "The way these young people engaged with complex questions around employment and homelessness, producing a documentary film that professionals would be proud of, shows just what a bright future Wythenshawe has "

The Lord Mayor of Manchester Councillor Carl Austin-Behan said: "The documentary was extremely professional and powerful, initiatives like this give a welcome voice to Manchester’s youngsters and provide a platform for them to develop self-confidence and learn new skills. The young people at the Wythenshawe Youth Forum have demonstrated an impressive range of abilities as part of this project and they should be congratulated on the way they worked as a team to tell this story." 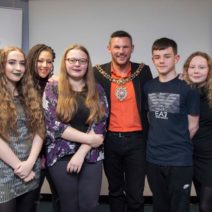