Wythenshawe's young people held a community litter-pick in Wythenshawe Park on Saturday, 20th September as the first of a series of initiatives they plan as part of their 'Wythenshawe Gone Good' campaign to challenge the negative perceptions of young people in the area.

This campaign came about following a meeting with Wythenshawe Community Housing Group's Youth Forum and local MP Mike Kane earlier this year, where they all worked together to draft a campaign to improve the image of young people in Wythenshawe.

The litter-pick was attended by 14 young people,  some adult volunteers,  Mike Kane MP,  WCHG's Director of Resources Susan Richardson and WCHG's Wardens team,  who all collected bags of rubbish in an effort to clean up Wythenshawe Park. 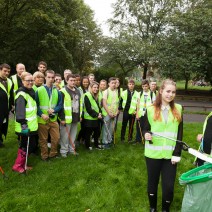