You are here: Home > News > Latest News > Find out if your bin collection is changing
1 August 2017

With less waste now going into Manchester’s grey rubbish bins and more people recycling waste, the Council needs to change its collection rounds so that the increased amount of recycling can be collected more efficiently

The frequency of household collections is not changing. Grey and recycling bins will still be collected on alternate weeks.

However, a minority of households’ collection days will be changing from Monday 31 July. After the city’s current collections calendar ends, around 17 per cent of households will be given a new day to put out their bins for collection.

All affected households will receive a copy of their new calendar, while residents whose collection day is due to change will also receive a letter in the post to keep them informed.

During the changeover to the new calendar, a small percentage of city households will have a one-off longer wait for their next collection.  The Council will contact those affected to explain the arrangements for collecting extra rubbish.

Manchester’s increase in recycling rates has helped the city save more than £7million in waste- disposal costs by this autumn, and there could be even higher annual savings possible in future if the recycling rate can be further improved further.

Postcode checker - residents can enter their postcode to find out when their bins will be collected. http://www.manchester.gov.uk/bincollections 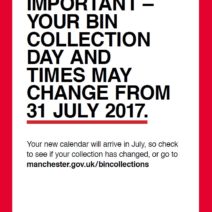