Manchester's legendary Frog and Bucket comedy club is bringing its unfailing variety of laughter and fun to Wythenshawe in the form of a road show gig at the Woodhouse Park Lifestyle Centre.

Saturday 24th September will see the inaugural gig with Phil Ellis as emcee and Chris McCausland and Rob Rouse the fantastic stand up acts. All of the monthly gigs will consist of an experienced compere and two headline-quality acts.

The Frog and Bucket are particularly excited by this new partnership and the opportunity to bring a taste of their club to the Wythenshawe area and in particular the Lifestyle Centre as The Frog's Jessica Toomey notes, “the centre is the real heart of the community and plays host to lots of different groups in the area so we're pleased to take the comedy to them and make it so accessible to a wider audience.”

Managed by Wythenshawe Community Housing Group, the Lifestyle Centre is a vibrant community facility. It offers something for everyone, bringing together local communities, businesses and partners, and provides opportunities for people from all age groups to socialise. They run classes in the arts, dance and sports as well as running a café, to which all are welcome visit regardless whether or not they are participating in an activity at the centre.

The show itself is in a lovely modern function room on the first floor that seats 120 at cabaret style tables; a cosier atmosphere than regular theatre seating in which to watch comedy. There's a full bar in the room and food will be available throughout the show. Plus there's a lovely roof terrace to enjoy an interval drink.

Ian Atherton, manager of The Lifestyle Centre comments, “we are really excited about the upcoming comedy night. It’s great to be associated with such a strong brand as The Frog and Bucket and it’s something we’ve been wanting to do for a while. There are still some tickets available but need to be purchased in advance”.

Compere Phil Ellis is an award winning comedian whose mischievous 'kids' comedy show won the Edinburgh Comedy Awards panel prize at the Fringe in 2014. His is an anarchic style where you're never quite sure what he's going to get up to next.

Chris McCausland is a Liverpudlian by birth, now resident in Surrey, and one of the few blind comedians on the circuit providing him with a unique and hilarious take on the world. In addition he is a star of Cbeebies series Me Too!

Rob Rouse, despite having kids and heading rapidly towards middle age, is still joyfully childlike and full of boyish energy. There's a wonderful silliness to his anecdotes many of which feature his experience living in the depths of Derbyshire. He's made many TV appearances so his is a familiar face too.

The Frog and Bucket comedy club originally opened in 1994 in The Britannia pub in the Northern Quarter area of Manchester city centre, moving to its current premises at the top of Oldham Street a year later. It was Manchester's first dedicated comedy venue and has played host to the likes of Johnny Vegas, Peter Kay, Lee Mack, Dave Gorman, Chris Addison, Ross Noble, Lucy Porter, Jack Whitehall and Jason Manford. Its amateur night also saw the very first stand up gig for John Bishop.

Over the years it has produced road show gigs beyond the club in The Guild Hall in Preston, Wigan Pier, Bolton Town Hall, Hyde Town Hall and the forthcoming two dates at St James' Club on King Street in city centre Manchester.

For further information please contact Marissa Burgess on marissa@marissaburgess.co.uk or 07970 487936. 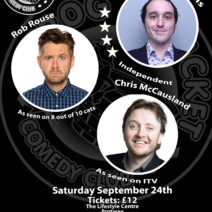