Over 50 people from local businesses attended the Food Poverty Campaign event with the Lord Mayor Eddy Newman on the 8th of December at Unit-E, Wythenshawe.

Unit-E opened in 2016, which is now the main food distribution point servicing seven much needed food banks in Wythenshawe, as supply and demand continues to grow.

Many local businesses, residents and families contributed food and cash to support people living in food poverty in Wythenshawe.

Food donations increased, from three to six tonnes over this period at Unit-E, proving to be a vital resource for the local community.

An impressive £4,085.00 cash donations were received and an additional 87 food parcels which provided and supported;

In total 1361.30kgs of food was distributed 1361.30kgs along with an additional, 91 children’s Christmas sacks containing a toy and selection box.

The Lord Mayor of Manchester, Councillor Eddy Newman said, “It was a honour to be part of this food campaign, bringing much needed sustenance to the local Wythenshawe Community. Unit-E continues to grow from strength to strength and has become a vital resource for many”.

Jacque Allen, Executive Director of Housing said, “Wythenshawe’s sense of community and pride never ceases to impress me, it was very moving to see some many local people get on board and support this amazing campaign. 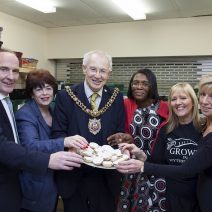