Call for Applications to Participate

Deadline for applications: Monday 2 February 2015
Do you want to take part in the parade or bring one of the squares to life and celebrate the city of Manchester and what it means to be Mancunian?
Based on the Manchester Day 2015 theme of Game On!, let’s make our city a colourful playground of music, outdoor theatre and fun and transform some of Manchester’s city squares alongside another wonderful parade.

What does Game On! mean to you?

Let’s unlock a whole new level of fun in the city!

Entry into Manchester Day is subject to a selection process and cannot be guaranteed.

Manchester Day is a GREEN event…
The use of vehicles or generators is strongly discouraged. We actively embrace structures which can be walked, pushed, pulled or wheeled.

How to apply
If you want to apply to be part of Manchester Day 2015 please apply online at: www.manchesterday.co.uk/participate-perform/

If you would like to take part in the Wythenshawe entry, please contact Susan Bevan by email on s.bevan@manchester.gov.uk or phone her on 0161 219 6391, preferably before 28th January so they can make sure you have the opportunity to be involved in creating the entry right from the start. 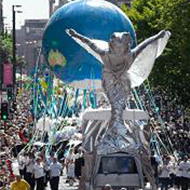