Wythenshawe has been chosen by Marks & Spencer as one of their ‘Spark Something Good!’ community projects as part of their week of transformational projects across Manchester from 7th October until 13 October.

Their volunteers spent a whole day of cleaning, decorating and general activity at a Unit in the town centre which is being turned into a food distribution hub for the the storage, coordination and distribution of food to food banks across the whole of Wythenshawe.

This new project has been developed via the Wythenshawe Food Poverty Group, which is made up of over 25 community representatives and was founded by the late Paul Goggins, MP for Wythenshawe. He brought together local faith groups and community leaders concerned by the growing number of people requiring food provision and the lack of a coherent strategy to address the issue across Wythenshawe. 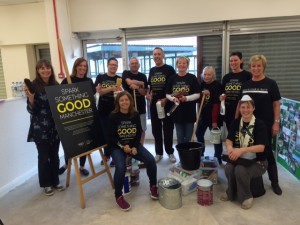 Real Food Wythenshawe, Wythenshawe Community Housing Group’s (WCHG) £1million Big Lottery funded community food campaign to inspire the people of Wythenshawe about the food they eat, is leading on this project via funding from Manchester City Council and WCHG by working with other food charities and businesses it is hoped that more food can be brought into the area to be distributed, with the central hub being supported by community volunteers trained to operate the new system.

Pamela Moran, Cooking Coordinator for Real Foods said; “Volunteers from M&S and also our own Real Food volunteers have been a fantastic help today. They have helped us prepare the centre in readiness for its launch. We are very grateful for all of their hands on help, including cleaning and decorating the walls and floor of the unit so that it can open soon and we can start to provide food packages to those most in need.”

Collette Garry and Jennie Fidler from M & S said; “We believe in doing the right thing, not just saying it. Spark Something Good is about getting out there and making a difference and is open to all our people, stores and customers. We have thoroughly enjoyed our day today and hope that we have played a small part in ‘sparking something good’ in this fabulous project to tackle food poverty.”

A second phase of the project will have greater emphasis on offering support and educational food projects with practical on-site facilities such as cooking and healthy eating sessions. This will bring together a broad range of people from different communities across Wythenshawe working collaboratively for a common goal to end food poverty in Wythenshawe. 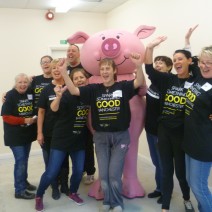