The first tenants have moved into their new bungalows at Tony Burns Gardens at the 'New Foxfield' development in Newall Green, Wythenshawe.

With the first phase now complete and another milestone passed 'New Foxfield' is Parkway Green's part of the Wythenshawe Community Housing Group's, largest development to date.

The bungalows have been designed for older tenants who are looking to downsize and free up family homes. The HCA invested Â£1.7m in the development as part of its Affordable Homes Programme.

Nora & Jimmy from No 1 Tony Burns Gardens said, "It's wonderful to finally be here after months of anticipation!  After moving from a larger house it was very daunting to downsize but now we are here we know it's going to be a hundred times better."

While another new tenant Mr Peter Kennedy said, "It's really good to be here and the staff at Parkway Green have been fantastic through the whole process. It was quite hard moving but with everything on one level it makes life so much easier for us as a family. I can't thank you enough"

Chief Executive Nigel Wilson said, "I'm delighted that the first tenants have now moved in to the bungalows at Tony Burns Gardens. The development looks fantastic and it's a fitting tribute to Tony Burns who did so much for Wythenshawe.  This is another major milestone for Wythenshawe Community Housing Group and we look forward to marking the occasion when the development is finished in September.' 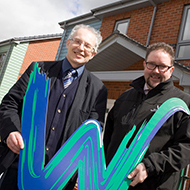