The development was officially opened in early October and this section of the film focuses on, 'Tony Burns Gardens', named after Cllr Tony Burns, former Chair of the Parkway Green Board and Lord Mayor of Manchester who sadly passed away in April 2012.

To commemorate this tribute, Sheila Burns was guest of honour at the event and unveiled a commemorative stone in memory of her husband Tony. 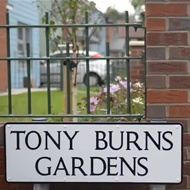