The Real Food Project Team from Wythenshawe Community Housing Group that encourages local residents to eat healthily with a message of ‘Grow it! Cook it! Eat it!’ was ‘highly commended’ at a national award ceremony that celebrates the very best community projects in the country.

Real Food Wythenshawe is a 5 year £1million Big Lottery funded community food campaign to inspire the people of Wythenshawe about the food they eat. From plant to plate, the campaign, which is led by Wythenshawe Community Housing Group, encourages and supports residents to learn how to grow their own produce and cook healthy, economical meals using local, seasonal produce. It demonstrates that healthy eating and ‘real food’ is possible for everyone, regardless of age, budget, ability or time.

The project was selected from almost 180 entries for the National Housing Federation’s Community Impact Awards and won the regional final to represent the North West region in the ‘Health and Wellbeing’ category.

Nigel Wilson, Group Chief Executive of WCHG said: “We are delighted that the work of The Real Food team has been acknowledged at these prestigious national awards.  They are doing a fantastic job and with their growing number of enthusiastic volunteers and partners they are really spreading the word about ‘real food’ and healthy eating to the people of Wythenshawe.”. 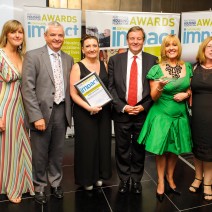