The Real Food Wythenshawe Team were delighted to take part in the King Street Festival in Manchester City Centre in early June.

As part of the event the team created a POP UP Park which helped to transform Manchester’s iconic & historic shopping street on the 3rd and 4th of June.

The event saw everything from an al fresco dining pop up restaurants to an art garden and stylish crazy golf spring up on the popular shopping street.

The event was a huge success with a great turnout and was a good opportunity for many to find out about the work the team do in Wythenshawe and beyond.

Real Food Wythenshawe is a project which aims to engage and excite the people of Wythenshawe in growing and cooking fresh, sustainable food.

WCHG’s Executive Director of Housing Jacque Allen said, “This was a fantastic project for the Real Food Team to be involved in and a fantastic opportunity to showcase the great work that they do in Wythenshawe to the city of Manchester and beyond. The team will be out and about at many different events throughout the summer including the Wythenshawe Games and RHS Tatton so make sure you come and say hello.” 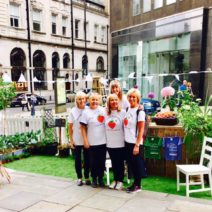