Real Food Wythenshawe’s ‘Fifty Shades of Green’ Show Garden struck gold at this year’s Dig the City in Manchester City Centre! The announcement was made by TV personality and garden designer Diarmuid Gavin and represents the culmination of lots of hard work, planning and a certain amount of creativity this summer!

The Real Food Team from Wythenshawe Community Housing Group (WCHG) is a £1million Big Lottery funded community food campaign to inspire the people of Wythenshawe about the food they eat. With their slogan of ‘Grow it. Cook it. Eat it.’, the team created a show garden with a difference with their very own edible garden and healthy cocktail bar to create smoothies and cocktails of ‘Fifty Shades of Green!’ The garden is a toast to health, wellbeing and happiness - a fun space where edible planting demonstrated why ‘growing your own’ means happy hour!

Jacqueline Naraynsingh, Real Food Programme Manager, said: “We have had a whirlwind few months with cookery demonstrations at the RHS Tatton Flower Show, inter-active stalls at Wythenshawe Games, the launch of a demonstration kitchen in Wythenshawe Market, the creation of an ‘edible interchange’ at the newly launched Wythenshawe transport interchange – not to mention being announced as a finalist in the National Lottery Awards! This Gold Award from Dig the City is the icing on the cake and a brilliant end to our fantastic foodie summer! Fingers crossed for the National Lottery Awards now!” 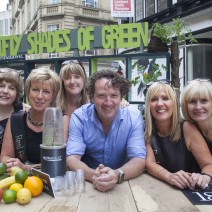