A major new report out today has called for government funding for housing to be refocused into renewing and regenerating ‘left behind’ neighbourhoods, with local communities and housing associations playing a central role.

‘No Place Left Behind’, the final report of the Commission on Prosperity and Community Placemaking, says that to replace spirals of neighbourhood decline we must invest in the physical fabric of local places and the social fabric of local communities.

It calls on Homes England to be the body to help lead this new wave of regeneration.

It also highlights the huge challenge of retrofitting the nation’s homes to the net zero carbon standard by 2050 in left behind places, where values are low and owners have little incentive or ability to invest in improvements.

To address this, it calls for Neighbourhood Improvement Districts: an ambitious programme of area-wide home retrofitting that can raise the overall value of left behind places and for the social housing decarbonisation fund to be brought forward, to kickstart the supply chains needed to retrofit the nation’s homes

Paul Fiddaman, CEO of Karbon Homes and Board member of PlaceShapers, one of the Commissioners said:

“Poor quality private rented homes owned by absentee landlords have blighted so called left behind areas for too long.

“The challenge of meeting the UK’s net zero target gives the government a great opportunity to tackle this problem head on. Creating neighbourhood improvement districts and offering funding for housing associations to acquire poor quality stock and renew it can help the government fulfil both it’s climate change and levelling up ambitions.

“Supporting this change should give agencies such as Homes England a unique opportunity to be a driving force for regenerating left behind neighbourhoods and decarbonising our housing stock.”

The Commission, which is chaired by Toby Lloyd, former special adviser to Prime Minister Theresa May, was set up a year ago to promote the best ideas for regeneration in ‘left behind places’ and ensure that the ‘levelling up’ agenda delivers on the government’s promises

It also finds that a mass transfer of ownership of empty shops, buildings and public spaces to communities and local businesses is the only way to achieve the government’s levelling up aims.

Rachael Orr, CEO of PlaceShapers and a Commissioner said:

“How a so called ‘left behind’ place feels for the people who live there has really guided our thinking throughout the Commission’s work and its recommendations. Communities and supporting anchor institutions, like housing associations, must be central to any plans to renew places and level up the country.

“It’s also striking how much of an opportunity the governments’ net zero target offers to improve left behind places. Done right, we can invest in homes, places and jobs to restore and renew our towns and cities fit for 2050.”

The report is realistic about the substantial investment needed to deliver the government commitment on levelling up. But alongside some ambitious and large scale policy recommendations, it also identifies a number of ‘hidden levers’ – technical changes to law, policy and practice that may not grab headlines or feature prominently in manifestos, but which are critical to improving existing processes or implementing bolder proposals.

The No Place Left Behind report will be launched in Westminster on Monday 20 September by Kwasi Kwarteng, Secretary of State at the Department of Business, Energy and Industrial Strategy.

This report comes ahead of the October launch of a PlaceShapers-commissioned report with the Bright Blue think tank, which looks specifically at the role of housing associations in levelling up. 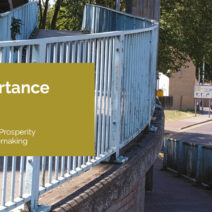