Young people from across Wythenshawe came together to hold a Victorian Tea Party, on Saturday 21st January at the Woodhouse Park Lifestyle Centre to celebrate the life of Sir Edward Watkin.

The event was a great success with over 100 people attending, including special guests the Lord Mayor of Manchester, Councillor Carl Austin-Behan and Wythenshawe and Sale East MP Mike Kane.

The project was delivered by Wythenshawe’s Community Housing Group’s WOW Zone and began in April 2016 with a team of staff and pupils who worked every week after school and in the holidays.

This is the third WOW Zone project, supported by the Heritage Lottery Fund, involving young people from Wythenshawe high schools in researching and preparing material for a multimedia publications.

Lord Mayor of Manchester Councillor Carl Austin-Behan said, “I can’t believe that I had never heard of Sir Edward Watkin – yet he led such a fascinating life and was such a pioneer. The WOW Team, Geoff Scargill and the young people involved in this project deserve enormous praise for the tremendous work they’ve undertaken as part of this initiative to tell his story."

Mike Kane for Wythenshawe and Sale East said,” “I would like to congratulate all of those involved in the World of Watkin project. The launch showcased the hard work of our young people in Wythenshawe. It’s the right time to be celebrating the life and achievements of Sir Edward Watkin as we prepare to welcome HS2 to Wythenshawe. I hope that Sir Edward’s innovative vision provides inspiration to all of our primary school children in Wythenshawe when they receive the World of Watkin book.”

Wythenshawe Community Housing Group’s Executive Director of Housing Jacque Allen said, “I would like to commend the hard work of all the young people involved in this fantastic project. We were delighted that as an outcome we can provide every primary school in Wythenshawe and Northenden with a copy of the World of Watkin book, so they can learn about the life and achievements of Sir Edward Watkin’.

Geoff Scargill, chair of the Friends of Rose Hill, a local group aiming to publicise the story of the Watkin family, said, “The Friends of Rose Hill were proud to be the WOW projects official heritage partners and I was delighted that we were able to work with the local young people on this project to help publicise the amazing work of the Watkin family. The project really released the potential of the young people involved and it’s great that the Heritage Lottery Fund supported this Wythenshawe initiative.” 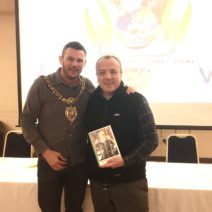