The ‘Real Food ’project helped to launch the ‘edible interchange’ which opened to the public in July 2015. It has raised beds and planters and is maintained through a network of volunteers and through an open volunteering session every Tuesday at 1:30pm.

Mike Kane MP for Wythenshawe & Sale East said, “It was great to see the Real Food team at the event. The work they are doing in our local community to encourage and support healthier lifestyles through growing, cooking and eating nutritional food is commendable. I remember seeing the start of their work at the opening of the Wythenshawe interchange last year and I am really pleased to see how it has developed with the help of the growing number of volunteers”.

Wythenshawe Community Housing Group Executive Director of Housing Jacque Allen said, “The Real Food project’s motto is Grow, Cook and Eat and encourage local people to eat healthily, the edible interchange is a fantastic example of this coming together and has been a huge success since it launched last year!”

The Real Food team have also been working with local primary schools to help look after the plants at the interchange– and if you are interested in volunteering with the project or just finding out more, then get in touch with Jacqueline on 0161 946 7554 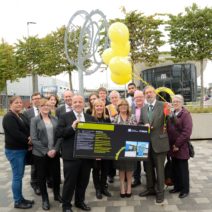