The site was officially opened by Chair of the PGHT Board, Cllr Paul Andrews and WCHG Group Chief Executive, Nigel Wilson and MP for Wythenshawe and Sale East Paul Goggins.

Part of the development, 'Tony Burns Gardens', has been named after Cllr Tony Burns, former Chair of the Parkway Green Board and Lord Mayor of Manchester who sadly passed away in April 2012. To commemorate this tribute, Sheila Burns was guest of honour at the event and unveiled a commemorative stone in memory of her husband Tony.

The scheme provides a mix of homes that caters for families as well as older tenants who have downsized to help free up family homes.  The Homes & Communities Agency (HCA) invested Â£1.7m in the development as part of its Affordable Homes Programme.

Chair of the Parkway Green Board, Cllr Paul Andrews said, "We are proud to officially open the New Foxfield development as it will make a huge difference to the local area. Making sure there is enough good quality, affordable housing available for the people of Wythenshawe is a real challenge and one that we will continue to address as we go forward at WCHG. "

Group Chief Executive of Wythenshawe Community Housing Group Nigel Wilson said, "We are delighted to open this development as it is a major milestone for the Group and is Parkway Green's largest development to date. It's also a fitting tribute to Tony who played such an important part in the local community over the years and was instrumental in the setting up and running of Parkway Green and helping us start the work on our new Group Structure. These new homes will leave a lasting legacy in Wythenshawe for the local community who were always close to Tony's heart."

Lovell regional director Nigel Yates says: "As a Manchester-based company, we feel a particular pride in having helped deliver this significant and much-needed development of well-designed, modern affordable homes for Wythenshawe. We continue to work with Parkway Green Housing Trust at another local development, Scout Drive, where we are constructing 14 new bungalows to help further improve the housing provision in the area."

Mrs Eden, a tenant from No 1 Tony Burns Gardens said, "We lived in our 4 bed house in Baguley for nearly 30 years but since moving there has been no looking back.  The community spirit here is great.  We have made great friends, and we all look out for each other.  It's brilliant." 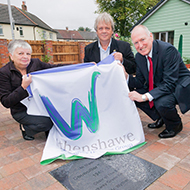