You are here: Home > News > Latest News > Vote for Real Food Wythenshawe to help them win the Lottery!
30 June 2015

Real Food Wythenshawe needs your votes to win their category in this year’s prestigious National Lottery Awards and the chance to go forward nationwide to the star-studded Awards ceremony to be broadcast on BBC One in September!

The project, based in Wythenshawe and led by Wythenshawe Community Housing Group, is a £1m Big Lottery funded community food campaign to encourage local people to eat healthily and live more sustainably with a message of ‘Grow it! Cook it! Eat it!’

The Real Food team has beaten off strong competition from over 620 organisations and is the only North West organisation to make it to the final seven in the Environment category.  It is now down to public voting to get them through to the final as the winner in their category and join the winners of the other six categories at the ceremony in September.

Voting opened on 24th June and will continue until midnight on 29th July.  To vote for Real Food Wythenshawe please go to www.lotterygoodcauses.org.uk/awards/environmental  or telephone their direct voting line on 0844 836 9680.  You can also follow the campaign on twitter: hashtag #NLAwards.

Nigel Wilson, Group Chief Executive of WCHG, who lead the campaign, said; “We are really proud of work that the Real Food team do to inspire people about the food they eat.  From all the fantastic work they do with volunteers in Wythenshawe Park to the practical support they give to local people such as their new demonstration kitchen recently launched in Wythenshawe Market, they are spreading the word!  We are delighted that they have been short listed for this prestigious award and we urge the public to get behind the team and nominate them so that the brilliant work that they do can be seen on a national stage!”

TV star and actor John Barrowman will be presenting the National Lottery Awards for the fifth time this year.  He says: “It is crucial that you show your support for your local projects so they can get the national glory that they richly deserve.  National Lottery players should swell with pride that £34 million of Lottery funding is raised every week for projects like these across the UK.” 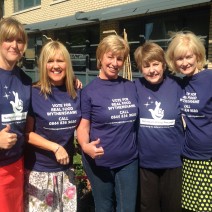