Wythenshawe Community Housing Group was delighted roofer Lauren Pollitt was chosen as a case study in the latest edition of the ‘Reflections on Roofing’ magazine produced by Women in Roofing .

Lauren is a member of that elite, but rare group of women of who are fully qualified roofers, working on the tools. Part of a dedicated team of six roofers at WCHG, Lauren spends her working days re-roofing domestic dwellings as part of a 20 year programme in Wythenshawe.

“I actually started in the office as an admin assistant in the Human Resources department”, explains Lauren. “Then a job vacancy came up for a roofer’s labourer. I loved the idea of working outdoors and being active. I’ve always been into sports and I like to keep fit. I decided to apply for the position up against several other candidates all of whom were male and was successfully appointed to the role”

Working as part of an otherwise all-male team, much of Lauren’s success has been down to her acceptance by her team colleagues who have embraced and supported her journey.

Lauren said, “I had to prove myself – but it’s no different for a man, you still have to do that, they treat everyone equally at WCHG. The first day I joined the team I was put on picking up nails into a bucket & cleaning up, the second day I was carrying and  setting up the ladders,  it wasn’t until the third day I was allowed on the scaffold or to use a tool ,” Lauren recalls. “They were shocked that I could climb a ladder as fast as them – I’m quite competitive! I can knock in a nail in one hit, just like them; I can carry as many tiles as them. I work hard,” she adds.

Like in any workplace scenario when your colleagues see you’re passionate about what you do, they take you seriously. My colleagues are a big part of why I love the job, I spend most of my day with these men, they get me through the day, they make each day different, we have fantastic camaraderie. When you’re tired at the end of the day, you’re freezing, your fingers are numb, they keep you going, and lift your spirits. I’m accepted as one of their peers and get asked down the pub with them at the end of the week.”

You’re that girl we see on the roof

For Lauren’s two children, who are 8 and 10 years old, the fact that their mum is often recognised on a local roof is a source of pride. “They think I’m the cool Mum,” Lauren says. “I was working on the same road as their primary school not long ago and they got lots of comments from their schoolmates. The little boys think I’m indestructible! which is cool”

Lauren’s unsure whether either of her daughters would follow her into roofing. She’s been into her children’s school to explain what the role of a roofer entails, and encourages the girls as much as the boys to consider it as a career. From Lauren’s point of view, it is the lack of visibility that holds girls back from going into roofing. “I think roofing needs to be advertised as an apprenticeship option much more. I wasn’t aware that there was a skill shortage, or how to go about finding a company that would take me on as an apprentice. I wish more employers were like WCHG, who are a very forward thinking organisation who have supported and given me these opportunities now I feel the sky is the limit pardon the pun”.

“Another problem for women in roofing is the workwear; it’s all designed for men predominantly by suppliers, WCHG sort out a supplier that provides women sizes, it’s really important to have appropriate kit to get the job done”, Lauren says “I know more women would do really well and succeed in roofing and love it,” Lauren adds. “Most women like to keep in shape - roofing offers a very healthy lifestyle – you end up doing more than your 15,000 steps a day!”

Like many women breaking into male-dominated industries, it is the enthusiasm, determination and sheer gumption that Lauren possesses that has helped her journey : “I was going to ask around before I did this interview; you know, survey what other people think of me as a woman in roofing”, she says. “But then I thought, what’s the point? I don’t care what they think. I love roofing and I want to stay in it!” 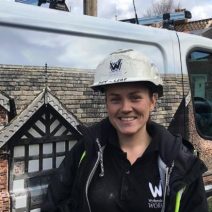