The Living Wage is an hourly rate set independently and updated annually. It is calculated according to the basic cost of living using the ‘Minimum Income Standard’ for the UK. Decisions about what to include in this standard are set by the public; it is a social consensus about what people need to make ends meet.

Nigel Wilson, Group Chief Executive of Wythenshawe Community Housing Group said; “We take our commitment to employees very seriously, so becoming a living wage employer was a natural step for us.  It meant that 25 of our apprentices and 10 Wythenshawe Futures employees were given significant wage increases.  This was particularly rewarding for our young apprentices who worked so hard on our very first ‘built by apprentices’ training scheme that saw our apprentices learning their trade direct from their senior colleagues on a development of purpose-built bungalows.”

Employers choose to pay the Living Wage on a voluntary basis. The Living Wage enjoys cross party support, with public backing from the Prime Minister and the Leader of the Opposition.

Living Wage Foundation Director, Rhys Moore said: “I would like to send huge congratulations to Wythenshawe Community Housing Group on being shortlisted for the Living Wage Champion Awards. The commitment of Living Wage Employers to responsible pay makes a real difference to families and communities across the country. We look forward to celebrating this even further when announcing the winners of the Awards during Living Wage Week.”

The awards are judged by an independent panel of community leaders from the Citizens UK Living Wage campaign. 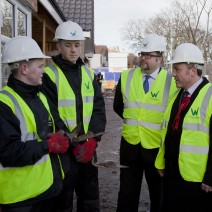