WCHG were proud to show their support for local charity Wythenshawe Safespots.

The Housing Group held a special fundraising ball at the Woodhouse Park Lifestyle Centre in May to help raise money for the survivor led organisation that aims to raise awareness and support those affected by Domestic Abuse in the area.

The event was attended by a number of high profile guests including the Lord Mayor of Manchester Eddy Newman, Sir Richard Leese, Mike Kane and special guest stars charity patron Sue Cleaver, who plays Eileen in Coronation Street along with Cathy Matthews played by Melanie Hill and Shona Ramsey played by Julia Goulding.

Wythenshawe Safespots was WCHG’s chosen charity for 2016/17 and colleagues managed to raise a total of £1000 through dress down days and cake sales.

The overall event was a huge success raising a staggering £9615, towards the charity.

Group Chief Executive of WCHG Nigel Wilson said, “We wanted to recognise the vital work that Safespots do here in the local community and I’m delighted the event went so well”. Wythenshawe Safespots puts the power back into the hands of women and men who have experienced domestic abuse. We are all very proud of what the centre has achieved, it is the next step in the journey to change the way domestic abuse is dealt with”.

Sarah Judge from Wythenshawe Safespots said, “It was a fantastic evening and I would like to thank everyone who helped support the event and to Wythenshawe Community Housing Group for their generous donation and all their hard work for putting on this event. The money raised will make a massive difference to the community of Wythenshawe.”

Patron of Safespots, Sue Cleaver from Coronation Street said, “I am very proud to support Wythenshawe Safespots. This is a wonderful charity working at the heart of the community, empowering Women and making a huge difference to people’s lives. 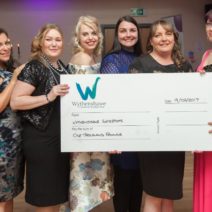