Wythenshawe Community Housing Group (WCHG) was proud to take part in Manchester Pride over the August Bank Holiday with their D.I.S.C.O themed float.

The overall theme for the annual parade was ‘Devotion’ and Colleagues from WCHG and community groups across Wythenshawe came aboard, to be carried through the streets of Manchester on a fabulous sunny afternoon.

Rob Brereton, Chair of the Your Voice Group at WCHG said, “It was a fantastic day. The streets of Manchester were buzzing with thousands of spectators and all the entries in the parade were unbelievable. So much hard work had obviously gone into it all and it really gave Wythenshawe and Manchester something to be proud of.”

Chief Executive of Wythenshawe Community Housing Group Nigel Wilson said, “The event was clearly a massive success and I want to thank all the colleagues who worked with Rob and the team to make the first entry from WCHG such a resounding hit, the disco and costumes looked amazing, I do not underestimate the time, effort and hard work that went into the float and organisation, so many thanks to everyone who supported and hopefully we have put a good marker down for the next event.” 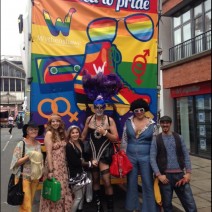