You are here: Home > News > Latest News > WCHG working in partnership with ‘The Proud Trust’
16 February 2016

WCHG have been working in partnership with ‘The Proud Trust’, who support lesbian, gay, bisexual and transgender young people in the UK.

The first quarter of the campaign saw successful engagement with a number of youths in the Wythenshawe area which resulted in a holistic curriculum being developed to cater for specific needs.

The curriculum was delivered via formal and informal activities with local youth provisions, such as Lifestyles Youth Club and Benchill Community Centre, in order to raise awareness of LGBT identities and challenge homophobia, biphobia and transphobia.

The second part of the campaign consisted of outreach work into schools and colleges, attending workshops and school assemblies at Wythenshawe Campus, Northenden Campus, Manchester Enterprise Academy and Newall Green High School, where demand has continued to grow.

A number of youths are receiving peer support through LGBT Youth North West along with online support.

This impressive partnership has seen young people grow in confidencein the short time they have been attending. They have been involved in the planning and delivery of the sessions, and attended our trip to Manchester Pride where they interacted well with young people from other provisions.

During the session on Pride and Stonewall, young people were able to gain a better understanding of LGBT history and feel more connected to their LGBT roots. Now that the group have settled in more, we are planning on running more issues based sessions and trips. http://www.lgbtyouthnorthwest.org.uk/ 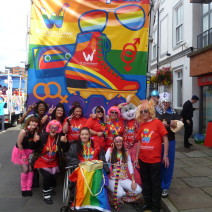