An exhibition to commemorate World War One through the eyes of Wilfred Owen’s poetry has been launched at Central Library, by Councillor Susan Cooley, the Lord Mayor of Manchester, who was greatly moved by the work of Wythenshawe’s young people.

The exhibition consists of a moving collection of poetry, letters, art and animation produced by 15 Young People aged 11-19 from Wythenshawe. They took part in a project which was funded by the Heritage Lottery Fund and Archives+ and delivered at the Wow Zone Learning Centre in Wythenshawe.

This project was initially prompted last summer by a suggestion by Wythenshawe’s late MP, Paul Goggins, who thought it would be great for local Young People to reflect on this year’s WW1 centenary.

The Young People have compared Wilfred Owen’s poetry with archive material and documented evidence to see if his view of life in the trenches accurately reflects the realities of trench warfare.

Andy Jordan, Manager of the WOW Zone, explains; “As the project evolved, we discovered that Young People were not only fascinated by the events of 100 years ago but they could express their thoughts in powerful, creative ways.  We are thrilled that their creative endeavours are being exhibited here at Central Library.”

Emily, aged 15 said; “I liked that we didn’t just look everything up on the internet -  I was able to see the equipment they had, look in the archives and speak to people who could tell us what war was actually like. I thought it was really interesting”.

Explaining the importance of the HLF support, Sara Hilton, Head of the Heritage Lottery Fund North West, said: “What a fantastic use of lottery money.  A massive congratulations to the young people for their moving tribute to World War One.  It has touched and moved everyone here today.”

The exhibition is open to the public at Manchester Central Library from 10th September until to the end of November.  It will then go ‘on tour’ around community centres in Wythenshawe.

Nigel Wilson, Group Chief Executive of Wythenshawe Community Housing Group said; “”The WOW Zone is part of our community investment programme, providing a high quality and innovative learning programmes to young people in Wythenshawe.  We are delighted that this WW1 exhibition can be appreciated by a wider Manchester audience.” 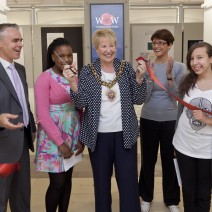