We are delighted to announce that the WOW Zone has been selected as one of three finalists within the primary category of the sixth annual Childnet Film Competition.

Founded in 2010 as a way of asking young people to focus on the positive use of the internet, the Childnet Film Competition invites schools and youth organisations from across the UK to capture their internet safety messages in a short film.  For 2015, the film competition theme built on this year’s Safer Internet Day theme - ‘Let’s create a better internet together’.

The WOW Zone, based at Woodhouse Park Lifestyle, is part of Wythenshawe Community Housing Group’s community investment programme, providing high quality and innovative learning programmes to young people in Wythenshawe, South Manchester.  They work with local schools on a variety of creative and technology-based projects, with the aim to help raise children’s aspirations in Wythenshawe and equip them with the knowledge and skills to enter the modern age of computing.

Andy Jordan, WOW Zone Manager, said: “This competition was a brilliant way of showcasing our young people’s creativity and understanding of e-safety issues.  We worked with students from Rack House Primary and Peel Hall Primary on this project and we are delighted that their hard work has paid off, especially against strong, national competition.”

The WOW Zone film ‘The TRUTH Online’ was one of the three films shortlisted within the 60 second film category, ‘A good online friend is someone who…’.

Childnet Education Projects Officer, Becky Nancarrow, said “With more entries than ever before, it is amazing to see so many primary and secondary schools, as well as youth organisations, exploring internet usage in a fun and positive way.”

Lisa Whittaker from The WOW Zone said “We are extremely proud of our children and the way in which they worked collaboratively to develop their film into something that displayed a clear and meaningful message.”  The links can be found via:

All the finalists’ films will be shown at a private screening at the BFI Southbank on Monday 13th July 2015.  All finalists will see their classified films on the big screen and the winners will be announced by a panel of judges including the BBFC, BFI and PhonePayPlus. 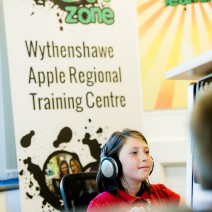