In April 2016, children attending the WOW Zone out of school learning centre in Wythenshawe created and submitted an animation to the Childnet Film Competition.

The competition is now in its seventh year.  It encourages young people aged 7-18 to create a short film to educate their peers about staying safe online. Lewis Brophy and Rachel Davies both 10 years old from Peel Hall Primary School were successfully shortlisted as finalists in the competition.

All the finalists’ films were shown at a private screening at the British Film Institute (BFI) Southbank on Monday 18th July 2016.  All finalists saw their classified films on the big screen and the winners were announced by a panel of judges including the BBC, BBFC, and BFI.  Lewis said “My favourite thing was seeing our movie on the big screen”.

After the ceremony the children were able to meet with industry professionals and get advice about how they might progress in their journey as film-makers.

Rachel said, “My trip to London was so exciting, especially as it was my first time! After doing the competition I would love to be a film-maker”.

Lewis said, “My favourite thing was seeing our movie on the big screen”.

Emma Davies said, “Rachel had a fantastic time in London. She won’t stop talking about it! She has gone into school this morning very happy with herself. She loves WOW Zone and what you do! This has given Rachel an opportunity to get into the world of computers and everything to do with them. Thank you very much.”

The ceremony highlighted possible opportunities for the entrants and this was complimented by the story of Keith Chirozva - the previous year’s winner in the secondary category who received an on the spot offer from a University after he showed them his winning entry.

Lewis and Rachel's entry, created at The WOW Zone, was given second place in the Primary Category. The children were awarded with a clapperboard, a trophy and the official certificate from the BBFC. The WOW Zone were awarded with a DSLR camera and accessories that will enable them to continue such projects with local young people. 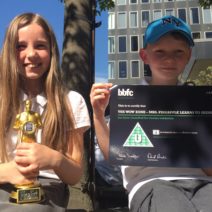