Wythenshawe Community Housing Group were proud to share with Wythenshawe Amateurs, in a turf cutting ceremony, to celebrate the dream of their permanent new home coming to fruition, located on Hollyhedge Park in Sharston, South Manchester.

Keen members of Wythenshawe Amateurs Football Club have been striving to secure a home of their own for many years, with Chairman Basil Kabbani on board who has vehemently campaigned to raise funds to make this dream become a reality.

The club runs 29 teams, all but five of them junior sides and two of them women’s sides, with more than 800 players registered. It has plans to run 50 teams and is looking for volunteers and sponsors.

Finances for the £840,000 project have come from the Premier League & the FA Facilities Fund which is delivered by the Football Foundation, the country’s largest sports charity. Other grants received were from the FA sponsor Budweiser, the Football Stadium Improvement Fund, Wythenshawe Community Housing Group, Power to Change, Manchester council, Sports England, National Sports Centre Trust and Neighbourhood Investment Fund which supported the club towards its goal.

WCHG Chief Executive Nigel Wilson said, “We are proud to have played a part and showed our support with the club’s journey to reaching their dream and much needed club house. I will watch with enthusiasm the completion of the build and this much needed facility along with the difference and contribution it will make to the Wythenshawe Community”.

Club chairman Basil Kabbani said, “We have been trying for years to secure the necessary funding to build our clubhouse and pitch and now the dream will soon become a reality.To be honest I have to pinch myself sometimes because I still can’t believe this is happening. A lot of hard work has gone into getting us to this point and to see the building work start is fantastic. We’ve had fantastic support from the Football Foundation, the FA, Manchester City Council, local councilors and Wythenshawe Community Housing Group, and I can’t thank them enough.We’ve also had great support from the local community and this will be their club as well.”

Building work is expected to be completed late summer. 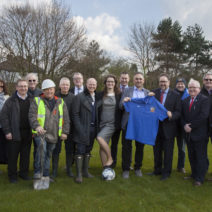