Young people from Wythenshawe were invited to Parliament by Mike Kane MP as a thank you for their recent ‘Wythenshawe Gone Good’ campaign.

Wythenshawe Community Housing Group’s youth forum was set up last summer and is made up of young people aged 13-18 years old from all areas of Wythenshawe.

Their ‘Wythenshawe Gone Good’ campaign is aimed at improving the image of young people in Wythenshawe and they kicked it off with a community litter-pick in Wythenshawe Park last summer. Mike Kane MP went along to lend a hand and as a thank you for all their hard work he invited some of the young people to visit him in London and have a tour around the Houses of Parliament.

Laura Bradshaw, WCHG’s Senior Youth Worker, said: “This was a brilliant trip for our young people and an excellent reward for all their hard work.  For most of the group, it was their first trip to London, for some it was their first time on a train. It gave them an insight into how parliament works. They all had a fantastic day.”

Here are just a few of the comments from the young people, who were truly inspired and motivated by this trip:

'It’s been a wonderful experience. It’s given me a lot of motivation and inspired me how youth could change everything, especially with Mike’s help and support.”   Tamara 15yrs

'It was good to get this perspective of how the Houses of Parliament actually works rather than images through the media. Mike Kane actually comes from Wythenshawe and lived in a council house before he became an MP.’ Kyus 16yrs

'We also found out quite a bit about history such as the suffragette who hid in Parliament in a very small room. I will never forget the time here in London.'     Tyra 15yrs

'It was a truly inspirational visit that I’ll remember forever.  It opened my eyes to see as a young person you can really make a difference. It had given me motivation to do more!” Faye 17yrs

'I am very thankful for having this very amazing opportunity to go to Parliament.  It’s been an amazing experience!’  Jess 16yrs

Nigel Wilson, Group Chief Executive of Wythenshawe Community Housing Group said; “At WCHG we recognise the unique opportunity that we have to strengthen our local communities and bridge the gap between individuals, neighbourhoods and government.  We are delighted that our young people have enjoyed their trip to London and we are especially pleased to hear that they now understand that they can have a voice and make a difference.” 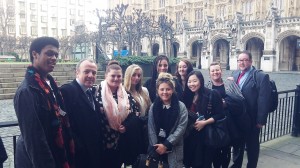 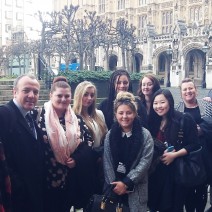