For the 2nd Year running Young People in Wythenshawe have had their say on the local projects that they think 5k worth of funding should be spent on in the area.

Over 100 local young people aged 10-19 attended a special celebration event at the Woodhouse Park Lifestyle Centre, where they listened to pitches from different organisations and then voted to commission local youth projects in Wythenshawe.

The seven winners were

As part of the event there was a celebration awards evening, where local people and organisations could vote for the Young People who they feel deserved recognition for the work they do in Wythenshawe.

And the winners were

The event was run by the Wythy Tree Youth Bank (WTYB) with the support of Wythenshawe Community Housing Group’s Youth Involvement team and was attended by the Lord Mayor of Manchester Cllr Eddy Newman as well as the CEO of Young Manchester Michelle Farrell-Bell.

Executive Director of Housing Jacque Allen said, “It’s was a fantastic evening and I must give credit to all the young volunteers involved who helped make sure it all ran so smoothly. This event is a really exciting opportunity for local young people to work together to pitch to a large audience and help the projects that they feel are important to them. Well done to all involved.”

Mentor of the Year Charlie Burkhill said, “I was buzzing to be nominated and didn’t think I would win, so when they said I had I was shocked and proud of myself for winning”

Young People working on the project and helped to make the funding criteria and guidelines and also led on the planning of the event and project.

To find out more or how to get involved in other projects such as this contact WCHG’s Youth Involvement Team on at YouthInvolvement@wchg.org.uk 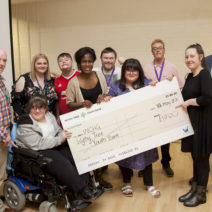