The Wythenshawe Youth Forum is a group of young people who want to make a difference on the things that matter to them.

All summer, they have been helping to raise money for the Mayor of Greater Manchester, Andy Burnham’s homelessness fund through their ‘Summer of Change’ Programme.

The Group have volunteered at numerous local events including the Wythenshawe Games, Community Centre fun days and have also taken part in a number of different campaigns including making a documentary and presenting to the Children’s Board at Manchester City Council.

To support their fantastic work, Wythenshawe Community Housing Group held a special dress down day on 22nd September, to raise money for the campaign with all donations going towards ending rough sleeping in Manchester and the total amount raised was an amazing £518.

Group Chief Executive, Nigel Wilson said, “The Youth Forum has worked so hard on the ‘Summer of Change’ and we were proud to support them. We are delighted that the Mayor of Greater Manchester, Andy Burnham has joined us today to accept the monies raised for this worthy cause. The Youth Forum’s documentary on homelessness really does spotlight this growing issue nationwide”. 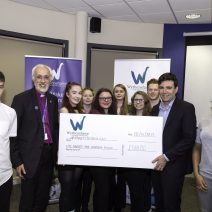