Wythenshawe Community Housing Group (WCHG), the newly created organisation for Willow Park and Parkway Green, celebrated in style on Friday, 10th May with the success of its young people at 'The Airport Group' Young Flyers Awards at Old Trafford.

Lauren Pollitt, 23, Trainee Human Resource Officer from WCHG, scooped the 'Young Employee' award.  She said; "I'm really pleased to have been awarded the 'Young Employee' award.  All the nominations were really good so it came as a bit of shock when they announced me as the winner.  I feel really proud of what I have achieved and would like to thank Wythenshawe Community Housing Group for nominating me."

Other young people that were shortlisted for Wythenshawe included:

The success of 'The Airport Group's commitment to improve employment and skills within its communities enabled the Group to secure the support of some of Manchester's key business and trade bodies when the alliance held a Dragon's Den themed event to shortlist the award winners. Philomena Chen, Head of Asia Pacific Development at UK Trade and Investment was amongst the 'Dragons' and commented on her delight at being involved with the event.

She said: "The younger generation has so many talents to offer, and The Airport Group scheme should put them in great stead for their future. The candidates were very enthusiastic; well done to each and every one who presented."

St Paul's R.C. High School in Wythenshawe also attended the event to showcase their magazine 'Hot On The Goss', which they developed as part of the Starship Enterprise project.

Victoria McDowell, Employment & Skills Development Manager at Wythenshawe Community Housing Group commented on the awards:   "The Young Flyers Awards was a fantastic occasion to celebrate the achievements of the young people we work with. This not only gives them a well deserved 'pat on the back', it will also help them to achieve their future ambitions by having such a fabulous award to put on their CV." 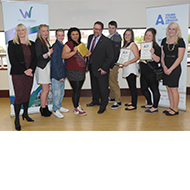