Young Mancunians are set to benefit from world-class youth and play services in Manchester, thanks to funding from new charity, Young Manchester.

The charity, which enables young people to support their own communities through social action, has funded its first ever partners with money from the #iwillFund.

The funds will give children and young people across Manchester access to new play sessions and youth clubs, delivered in a different way.  Young people will be supported to develop a habit of service – through volunteering, fundraising and campaigning - to make positive changes for themselves and their communities.

The move is part of Young Manchester’s £2 million partnership with the #iwillFund, which was announced in November 2017. The #iwillFund supports the aims of the UK-wide #iwill campaign to increase the number of people taking part in social action. It was created through £40 million of seed funding from the Government and the National Lottery through the Big Lottery Fund. Young Manchester is acting as a match funder and awarding grants on behalf of the #iwillFund.

Chair of trustees Nigel Wilson commented, ‘’It’s a proud moment for us at Young Manchester to be announcing our very first partners. Since the charity launched, we have worked hard to raise more funds in addition to our initial investment from Manchester City Council and we will now see all the hard work pay off through the organisations we have funded, enabling a step change in social action across the City.’’

Young Manchester is a new charity, established to commission youth and play services across the city of Manchester, received an initial seed investment of over £3.5 million between 2017- 2020 from Manchester City Council.

During April, Young Manchester will be announcing some of the youth and play activities available to families and young people, in the lead up to a celebratory event on 30th April, where all the partners will come together to announce news of where the funds will be allocated.

Sarah Klueter, Interim Chief Executive of Young Manchester added, ‘’It has been an exciting few months for the team, who have delivered a successful first round of funding to some amazing organisations in Manchester. This support will help Manchester on its journey to become a truly world-class city by investing in our children and young people.’’

Around 15,000 young Mancunians will benefit from the funds, with over 100 sessions running across the City. 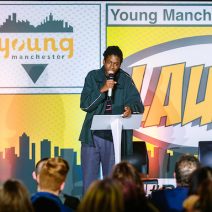