Wythenshawe Community Housing Group’s award winning garden from this year’s RHS Flower Show at Tatton Park has been brought back to Wythenshawe and recreated in the horticulture garden at Wythenshawe Park.

‘A Taste of Wythenshawe’, was originally designed and built for the RHS Flower Show in partnership with Reaseheath College in Cheshire.  It was officially re-opened in Wythenshawe Park by Councillor Glynn Evans on Thursday, 23rd October 2014.

The inspiration behind the garden was WCHG’s Real Food Wythenshawe campaign, a five year £1 million Big Lottery-funded community food campaign to promote ways that people can grow their own fruit and vegetables and cook healthy, economical meals.

The garden impressed the judges with its innovative and creative approach to growing edible plants suitable for a 21st century urban community.  It was also a great hit with the public, and was runner up in the People’s Choice Awards for Best Show Garden.

Wythenshawe Community Housing Group (WCHG) transferred the garden from Tatton Park and rebuilt it in Wythenshawe Park with a project group that included the Real Food Team and their volunteers, Grounds Maintenance staff from WCHG, horticultural staff from Wythenshawe Park and members of the Turnaround team, a programme developed by WCHG to offer training and potentially employment opportunities to those with criminal records.  Team members were trained by Reaseheath College and have successfully gained their NPTC Level 2 horticulture award.

Councillor Susan Cooley, the Lord Mayor of Manchester visited the garden recently and said: “It’s fantastic to see this award winning garden return to Wythenshawe. The garden proved incredibly popular at the RHS Flower Show, impressing both the judges and public - I’m sure it will have the same impact in the local area.

“The innovative garden not only looks wonderful but illustrates that it's possible to grow your own fruit and veg. The garden, titled “A Taste of Wythenshawe’, is a fine tribute to the area and I’m certain local residents will be inspired by all the hard work that has gone into its creation.”

Nigel Wilson, Group Chief Executive of WCHG said: “It was always our intention to bring the garden to Wythenshawe for local people to enjoy. It has been a great project for us as it has highlighted some of the key messages of our Real Food Campaign and will hopefully encourage people to think more about the food that they eat.  Our Turnaround Team and Grounds Maintenance colleagues have also enjoyed working on something different and learning new skills.  It was a lot of hard work, but we hope that local people of Wythenshawe will come and visit and enjoy seeing ‘A Taste of Wythenshawe’ in its home territory!” 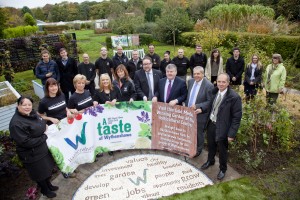 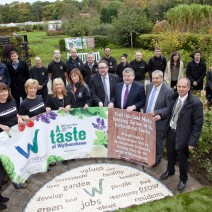