Wythenshawe Community Housing Group’s Real Food Wythenshawe Team was delighted to be invited back to the RHS Flower Show to deliver a cooking masterclass in the Showcase Cookery Theatre, set in the beautiful surroundings of Tatton Park in Cheshire.

They were able to showcase some of the fantastic local Wythenshawe produce available through cooking one of their tasty & healthy ‘Real Food’ recipes.

The demonstration allowed them to talk with the live audience around the journey that food has to make to reach the plate, which is all based around the team’s motto of ‘grow it, cook it, and eat it’.

They cooked ‘Curried Lentils with Sweet Potato’ and ‘a Mixed Bean Chilli’ and gave out 264 tasters in total and 172 recipes at the event.

If you are interested in finding out more about Real Food, the team have a pop up kitchen in Wythenshawe Indoor Market and you can also find their recipes alongside many more on their Facebook and Twitter pages.

Real Food have a special relationship with RHS Tatton, as in 2014 in partnership with Reaseheath College, they won Gold for their show garden with their edible garden ‘A Taste of Wythenshawe’, which is now on display in Wythenshawe Park.

Wythenshawe Community Housing Group Executive Director of Housing Jacque Allen said, “It’s been very busy summer for the Real Food team. They have been everywhere from the allotment of the future in the European City of Science Festival, Manchester to RHS Tatton! They do some fantastic work here in Wythenshawe and we were really delighted they were invited to showcase just a small part of what they do at such a prestigious event like RHS Tatton”. 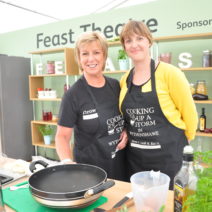